Tengrism (also known as Tengriism, Tengerism, or Tengrianism) is an ancient ethnic and state Turko–Mongolic religion originating in Central Asia and the Eurasian steppes, based on folk shamanism, monotheistic at the imperial level, and generally centered around the titular sky god Tengri.[1][2] The term also describes several contemporary Turko-Mongolic native religious movements and teachings. All modern adherents of “political” Tengrism are monotheists.[3]

It was the prevailing religion of the Turks, Mongols, Bulgars, Xiongnu, Huns, and, possibly the Magyars, and the state religion of several medieval states: Göktürk Khaganate, Western Turkic Khaganate, Eastern Turkic Khaganate, Old Great Bulgaria, Danube Bulgaria, Volga Bulgaria, and Eastern Tourkia (Khazaria). In Irk Bitig, a ninth century manuscript on divination, Tengri is mentioned as Türük Tängrisi (God of Turks).[4] According to many academics, Tengrism was a predominantly polytheistic religion based on shamanistic concept of animism, and during the imperial period, especially by the 12th–13th centuries, Tengrism was mostly monotheistic.[5] 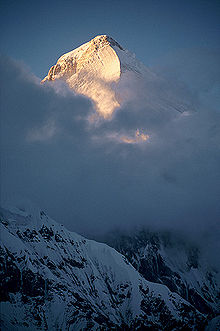 Peak of Khan Tengri at sunset.

Tengrism has been advocated in intellectual circles of the Turkic nations of Central Asia (Kyrgyzstan with Kazakhstan) and Russia (Tatarstan, Bashkortostan) since the dissolution of the Soviet Union during the 1990s. Still practiced, it is undergoing an organized revival in Buryatia, Sakha (Yakutia), Khakassia, Tuva and other Turkic nations in Siberia. Altaian Burkhanism and Chuvash Vattisen Yaly are movements similar to Tengrism.

Tengri can either refer to the sky deity or refer also to other deities (compare this with the concept of Kami).

Tengrism is centered on the worship of the tngri (gods), Tengri (Heaven, God of Heaven) being one of them. In the Mongolian folk religion, Genghis Khan is considered one of the embodiments, if not the main embodiment, of Tengri’s will.[6]